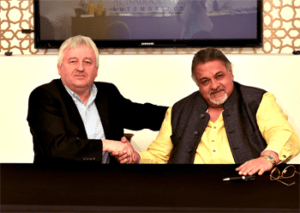 February 2016: Al Nabooda Automobiles, the sole distributor of Audi, Porsche, and Volkswagen in Dubai and the Northern Emirates has entered into a franchise agreement with Belron, the world’s leading vehicle glass repair and replacement group.

With the final 11th and 12th rounds taking place at Bahrain International Circuit last weekend, all team-mates Karim Al Azhari and Clemens Schmid had to do was avoid a major catastrophe to keep their title hopes alive.

But both drivers showed why they have remained on top of the team standings since the opening two rounds at the same circuit back in October last year, with each scoring emphatic victories over the final weekend.

There was no stopping Schmid in Round 11, who scored his seventh consecutive victory by a comfortable 12.8 seconds, while Al Azari was rewarded for the key role he played in the team’s overall success in the GT3 Cup this season, winning the final round of what was an ultimate season for the duo.

“This is the first time the Porsche GT3 Cup Championship Middle East has had a Team Championship division, and I am absolutely ecstatic to win the inaugural title for Al Nabooda Racing,” said Al Azhari.

“This was my first full season in the GT3 Cup and I have subsequently learnt a lot of new detail about the car. My progress was faster than I had expected, and to win the last round far exceeded my own personal expectations. The competition has been so tough all season.”

“We will enjoy this victory for a long time and we look forward to next season in the new 911 GT3 Cup car. Everyone will be starting from scratch, and hopefully we can use our skill and experience to stay on top again.”